"Right Shift" to shoot and "Enter" to bomb, "Arrow Keys" to control flight and "Escape" to go back to menu.

Are we completely detached from the wider world, more insulated, less connected, fragmented or are we ultimately in charge?

Scarborough Art Gallery has teamed up with the University of Hull and a contemporary British artist to present a new exhibition which aims to spark debate around how technology has enabled us to become insulated from the world around us. Annabel McCourt’s REMOTE comprises two brand new installations which will be seen at the art gallery at the University’s Brynmor Jones Library, with a ‘satellite’ piece at Scarborough’s Rotunda Museum.

REMOTE will see a replica of a ground control station - a land- or sea-based centre that provides facilities for humans to control unmanned aerial vehicles, or drones, used by the military during conflicts.

Rather than the usual high-tech military equipment, the replica will provide the physical portal for unexpected AR (Augmented Reality) ‘scenarios’. This game forms one such scenario.

REMOTE will be seen alongside a second new piece, Theatre of War, for which Annabel acquired and repurposed former signage from Scarborough’s Stephen Joseph Theatre.

An interactive maquette of REMOTE will be on display at Scarborough’s Rotunda Museum.

Annabel says: “I grew up in rural Lincolnshire, to the soundtrack of A-10 Tank Buster gunfire at RAF Donna Nook bombing range. From the Cold War to current conflict, Lincolnshire has provided a platform for ‘intervention’.

“In my new exhibition, rules of engagement, gaming culture, fake news and technology will collide with our preconceptions, our imagination and ultimately our moral code. The aim is for it to spark debate.

Simon Hedges, Head of Curation, Collections and Exhibitions at Scarborough Museums Trust, says:  “REMOTE is a continuation of the exponential expansion of the ‘Suffering Arcadia’ series and a further opportunity to both work with Annabel McCourt and further develop our new partnership with Hull University’s ‘Culture Campus’. McCourt’s work is fresh and of the minute as much as it is an interrogation of humanity’s age-old collective struggle between morality and power, right and wrong, good and evil.”

REMOTE was made possible by St Hugh’s Foundation for the Arts, which awarded Annabel its Main Award in 2018. The registered charity has made over 100 awards to artists and arts organisations in the City of Hull, East Riding of Yorkshire and Lincolnshire.

Annabel has teamed up with award-winning Yorkshire companies the Strata Group and Betajester Ltd to realise this ambitious blend of metal fabrication and technology. The game was developed by Dale Wells.

Annabel McCourt has a diverse portfolio with work ranging from lens-based gritty social-realism, through to installation art, moving image and architectural interventions, inspired by fact, folklore and legend.

"Right Shift" to shoot and "Enter" to bomb, "Arrow Keys" to control flight and "Escape" to go back to menu. 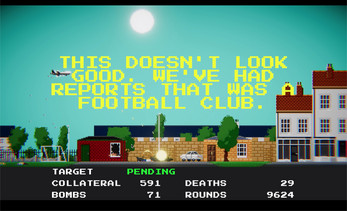 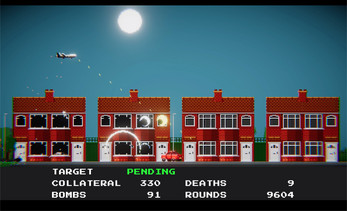 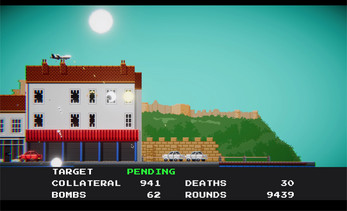 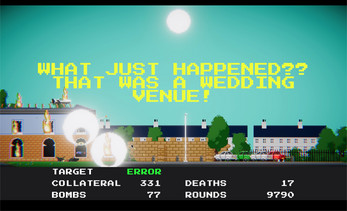 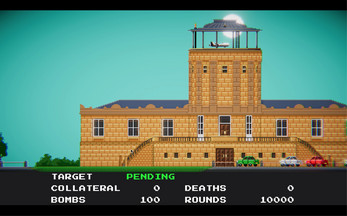 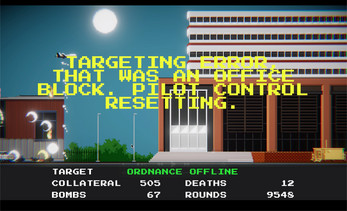